The SpaceGuardians project was initiated in October 2017. Over a 3-year period, the partnership, comprising experts in astronomy, storytelling, educators and e-book developers from the UK, Portugal, Greece and France, will develop and test an innovative approach to increase the astronomy literacy of children (3 to 6 years old) and to raise awareness of the importance of astronomy and STEM education.

In the initial research phase of the project, partners undertook user research in their respective countries, in order to establish what children aged 3-6 think about when they think about space, what nursery teachers are currently teaching on the topics of astronomy and space and to gain further insight into what educators felt would work, in terms of improving children’s knowledge on space and astronomy.

Across Europe, we found that the topics of space and astronomy spark great curiosity within children, and they are well exposed to characters ‘not from Earth’, through various literature and media, e.g cartoons and comics, etc. Children enjoy stories and story-telling features heavily in the early stages of their lives, in particular, bedtime stories. Children connect with fantasy, and this will be depicted in the e-book, using various colours, shapes, and characters.

We also discovered that reading and story-telling is done regularly in nurseries, etc, and interaction with an e-book was a welcomed concept, with the potential to further engage children in learning.

We are now at the stage where we have written the storyline for the e-book, which comprises of two stories. The first story follows Rita, who explores the concepts of the moon, earth and sun. Rita meets the SpaceGuardians and is welcomed to join them. She is awarded her SpaceGuardians badge, which is also available for the user to print, in order to reward them for their learning.

In the second story, Rita goes on a mission with the SpaceGuardians, where the concepts visited in the first story are explored in greater depth. At the end of the e-book, the user is awarded a badge for Solar System Observer.

The reward system is used to give the children a sense of achievement upon completing the e-book and their intake of the information within.

We have also created the initial illustrations for the e-book, which have been distributed in nurseries and learning environments across the partner countries. The purpose of this is to get children, aged 3-6, to colour in the illustrations, in order for us to develop the characters, environment and colour schemes for the e-book. Involving our target market in the design process, will allow us to create an end-product which resonates with and invites children to immerse themselves in learning about space and astronomy.

To conclude, the research, story concept and current development of the project looks promising, for the project partners to deliver on our shared goal of creating an e-book which will increase the astronomy literacy of children, aged 3-6, and to raise awareness of the importance of astronomy and STEM education.

We have now released our 4th Newsletter

Download a copy and find out what we have been up to. 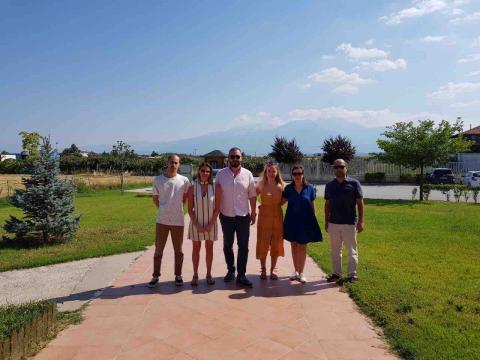 Space Guardians had their 4th meeting in Katerini

Platon held the 4th transnational meeting at their school in Katerini, Greece on the 27th and 28th of June 2019.

Download a copy and find out what we have been up to.

END_OF_DOCUMENT_TOKEN_TO_BE_REPLACED

There are currently no events scheduled. END_OF_DOCUMENT_TOKEN_TO_BE_REPLACED
Scroll to top